What's On The Menu Today…

Depends on what's on hand

As I’ve mentioned in previous posts, I wasn’t looking forward to today.  Despite it being the first day of Spring here, Hubby’s absence and his can’t-come-soon-enough homecoming preoccupy my thoughts.  Only 27 hours more to go.

I’ve been fortunate in that the timing (March Break and BF’s Birthday) made for lots of distracting activity and I really didn’t have too much time to get too lonesome.  Still, I knew today would be the kicker and I set out to make it as positive as possible.

I actually sobbed a little…okay, I freakin’ cried.  Yesterday the walkway and driveway were clear.  Yesterday I spent 40 minutes clearing a path to the deck and then scraping snow off the deck so I could sit out there on nice days…like YESTERDAY.

I decided to go out sooner rather than later to run my errands.  The snow was supposed to turn to rain (and it has) and that’s just yucky driving conditions.  So out I went and spent 20 minutes in the wet snow brushing 5cm of it off the car and asking myself the old standby, “Why do I live here?”

The trip was slow but uneventful, I learned how to drive in the winter and I think that helps, and I returned home safely just under an hour after I left.

In my mailbox was a package.  I knew what it was, I smiled a happy six year old grin and opened it before I took my coat or boots off…sitting on the bench in the front hall. 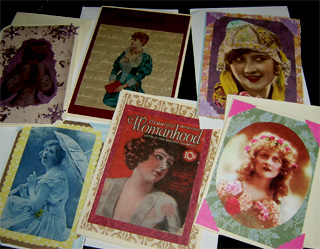 Lookit what Bernie @ One Mixed Bag (I’ve linked to her Card Hop page) sent me!!!!  Aren’t they lovely?  I’m so in love with the vintage images and Bernie’s subtle embellishments are awesome.  I’ve already decided that a couple of them are going into frames instead of envelopes.  😀

This random act of kindness couldn’t have come at a better time.  I really was feeling very low before I got her package.  Whether it’s coincidence or divine intervention doesn’t  matter, I’m just so grateful to Bernie for her thoughtfulness and generosity.

She truly made my day.

§ 7 Responses to Random Acts of Kindness

You are currently reading Random Acts of Kindness at What's On The Menu Today....