What's On The Menu Today…

Depends on what's on hand

Hi all! Just a note and a pic to let you know that I’m still alive and what I’ve been up to.  I haven’t written lately because all I’ve been doing is whinging about winter, despite it being one of the mildest and shortest we’ve ever had. Still, it’s not winter if we’re not complaining that it’s not Spring. Hehe.

Anywho, recently Hubby and I have discovered the fun of auctions. Yep, where you stand (or sit if you show up early enough) in a crowded room with a large number and hold it up to buy someone else’s old crap. There’s something very exciting about the whole thing, especially if you’re partial to junk because really, that is the majority of what’s for sale.

For years, I’ve been a casual collector of candle and oil lamps. There’s not one room in my house that doesn’t have some sort of non electrical light source. I think this might have something to do with my love of thunderstorms, particularly when we lose power. It’s pretty much the only time I actually get to use them.

Well, it turns out that auctions are a great source for old kerosene and oil lamps. For me, it’s a virtual treasure trove and in just two auctions I’ve acquired over a half dozen. Unfortunately, most of them have burners that are rusted or broken and all them came needing a good cleaning.

These are a few of my favourites. The amber one I inherited from my grandmother who passed away a couple of years ago, the rest are auction finds. It’s been interesting to research the burners to find replacements and I finally managed to get an order through today. I’m so excited to get the parts, finish cleaning up the lamps and fill them with kerosene.

I may just have to pretend we had a power outage to try them all out. As long as the computers work I don’t think Hubby and Daughter will care much. They’re used to that sort of thing. You should have seen me when I was into making medieval nightgowns and bonnets. Yes, I actually wore (still do on occasion) them around the house.

Is 40 to young to be considered eccentric?  Maybe I’m just weird.  😛

Hope all is well with you guys and I’ll be making the rounds soon to catch up on my commenting.

I’ve been so lax with this project and it’s time to get back on track.  Thanks to Cate @ Moments of Whimsy for hosting this “do what you love once a week” posting.

Solace in my Furriends

My sadness is a blessing
My down and out holds possibility

They purr, wag their tails, roll on their backs
Their adoration all mine

Hey, if it works for lemons and lemonade…

Life for the last few weeks has been…well, its been rather strange. Between the Paleo Challenge, looming tax bills, recurring issues with Son and the inevitable winter blues, I’ve been stretching myself.

So yesterday I made blueberry sauce. 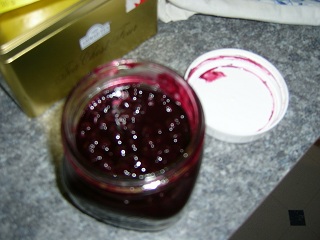 Just checking in with an update.

We completed our 30 day Paleo challenge this week and right away we went for processed bread…seems to be the thing we all missed the most. However, we also felt the consequence of gorging on something we haven’t had in over a month and each of us has suffered from bloating, stomach aches and feeling tired and listless.

A case of too much too soon.  Overall though, we enjoy this new way of eating and haven’t simply reverted to our old habits. The positives are having more energy, losing inches if not pounds and getting rid of a lot of the negative inner dialogue that goes along with eating and feeding yourself and your family foods that you know aren’t good for you.

One of the downsides is the cost of eating Paleo, which I think is ironic. Cavemen didn’t have grocery bills. The reality is though that we spent 50% more on our monthly grocery bill for January.  Our average is $500 a month, and we spent $768 during the challenge.

That’s not including the fresh fruit, the meats, the veggies and the greens. Yes, it’s all amazing and it tastes awesome…but it doesn’t come cheap. It certainly is a drawback.

This month the focus is on maintaining the diet and incorporating exercise…for me. Hubby and Daughter are way ahead of me there.  They’ve already set themselves are regular routine and are enjoying it. I’m a little slower to get on board.

You are currently viewing the archives for February, 2012 at What's On The Menu Today....